I’ve missed Scout. It’s been 6 weeks since I saw her last and she’s done a lot of growing! Don’t worry, she’s still bendy and lanky enough to fit on my shoulders (and through a catflap) but she’s looking much more like a proper grownup doggo. I’m pretty sad to have missed the puppy months and get started on her training but hopefully five weeks intense bonding will make up for lost time. And I know she’s been well cared for by Street Hearts while I’ve been gone. Just like they do for the fifty other dogs in their care. The situation is chronic and Emma and Anthony simply can’t continue without better facilities and volunteer help. I was there for nine days and with the three of us working flat out we barely found time to eat. (More on this in my Street Hearts blog post to come.) As a result I feel like I neglected Scout a little too. I was so busy trying to gain the trust of scared dogs, or lead train puppies or, to be perfectly accurate, shovelling s**t, that Scout got a little pushed to the sidelines. She’s the complete opposite of the scared ones that need work; interested in everything, nuzzling at you for hugs, getting involved in everything you do, eating all the food she can see. “Get Out, Scout!” is, unfortunately, a popular refrain. She’s been so lucky to have found a place at Street Hearts but she isn’t suited to shelter life and it’s clear she needs new challenges and adventures.
So, on to the adventure training: Scout hasn’t slept in a house since being rescued (no idea if she had before that) and I was dubious about her ‘housetraining’ skills. The idea of cleaning up tent accidents filled me with dread but I was able to stay in a bungalow on the Street Hearts property so I could roll up the rugs and see what we were working with. Nine days and no accidents. She may have woken me at 3 in the morning once by jumping on me, but most of the time it was 5.30-7.30 and I’m much happier with that than waking up to a cleaning job. Awesome doggo points: 5

I wanted Scout to feel comfortable in Bill, the Burley Tail Wagon. It’s going to be her caravan, her safe place, her little snail shell…if snails got other, overly dedicated species to pull their shells around for them… We began with the wheels off, all the flaps open and a blanket, toys and treats inside. Doggo heaven. She jumped in with a little encouragement, sat for her Orijen treats, but wasn’t interested in spending much time in there. That evening she slept on the rug, but the next night she curled up inside Bill and even when the wheels were on she was very content to curl up or stretch out in her new bed/home. She actually seemed pretty pleased with herself, heck, I would be – this thing is awesome. She loved it so much that one morning I woke up to see she’d given the front flap a bit of extra attention (she chewed it, guys.). Emma had warned me that she was going through a secondary chew phase (…at least I really hope it’s a phase) so I’d brought with me a few of Will’s old toys and an antler chew. Turns out she really likes soft furnishings so I’ll have to buy a few stuffed toys she can busy herself with de-stuffing. I used an anti chew spray on the trailer and we didn’t have a repeat incident but I have to keep an eye on what she decides to amuse herself with – she listens when I say “no” and gave me back the pyjama shorts she nicked off my bed very nicely but she clearly needs some acceptable chew outlets so I don’t turn around to see nothing left of the trailer but some wheels and a satisfied dog. Awesome Doggo points: -1
The first bike + trailer training went well. I borrowed Anthony’s bike (Jeeves is still in the UK) and hooked up the trailer attachment easy peasy (points to Burley Design). It was clear Scout was a little unsure (thanks, distant thunder for not making that easy) but with some encouragement, a seatbelt (harness) and a bit of speed she stopped trying to leap out. I’d quite like to be able to ride with the front flap open for her to get a better air flow but she’s clearly not ready for that kind of self control yet. Maybe once we’ve been on the road a while. ADP: 4

A few days later Emma and I saddled up to cycle to meet the Mayor, who has been very supportive of their work in the town and wider municipality by securing money for neutering and lending his Mayoral seal of approval to the programme. Leaving Street Hearts HQ, however, is not as simple as getting in a car or hopping on a bike. When we’re around, many of the dogs are free range and wander about the place but they need to be in pens and paddocks while unsupervised so when everyone leaves we run around catching puppies and scaredy dogs and finding places to put them. We received a dog the day before who has one of the worst cases of anxiety I have seen. He howled all night and was desperately scared of his new environment and of being without us. Emma and Anthony use expensive tranquilliser paste to aid catching feral dogs and we couldn’t move this new dog without traumatising him so we decided to give him a dose of sleepy juice so he could get some sleep and relax a little. We put it in cat meat because every dog knows that cat meat is delicious and, unbeknownst to me, while Anthony was keeping the other dogs away from the sleepy cat food, Scout followed me into the garden on our way to the van and she zoomed in behind him and gobbled up a small ticket to snoozetown.  Brilliant. It’s hard to say how much she snaffled and it affects different dogs in different ways so I was really hoping she hadn’t dosed herself up to the eyeballs – I wanted to get her running next to the bike at some point….good work, Scout. ADP: -3
It’s hard to tell exactly and maybe it was actually for the best, but she was hella chill on the ride. It took us about 25 minutes and she wasn’t all that interested in standing up when we got there. And her pupils were a little small, and she was walking a little bit sideways and blinking kinda slow….Yeah, ok, she was high as a kite, my dog stole drugs from another dog and she wasn’t even sorry. Do I need an intervention? She slept through till 8am though…it was kind of nice… Can I give her an extra AD point for that?

The meeting with the mayor (Scout safely trying to dopily steal food in the vet’s store room while we did grownup stuff) was extremely positive. I think we’re going to have a really exciting send off from Dryanovo – maybe even with people joining the first few miles on their bikes.

Street Hearts have done wonders for the abandoned and stray dogs here but the next mission is to educate people who have unneutered dogs on their property either as guard dogs or livestock or crop guardians. Twice a year in ‘puppy season’ Street Hearts deal with dumped and abandoned puppies left to die of cold or blood loss from fleas or malnutrition from worms or to be torn apart by jackals. It’s astonishingly irresponsible and callous behaviour but it is very common. By starting with fanfare from the little town where Scout was dumped and then on to the brilliant Veterinarian in Dryanovo where she was neutered, vaccinated against disease and microchipped so I can find her if I lose her, I hope that awareness might spread and attitudes towards dog ownership might begin to shift in a more responsible and caring direction.

I managed one more short excursion with Scout running alongside the bike after she’d slept off her high and she’s certainly less sure of herself outside in the big wide world. She wasn’t quite up for pulling me along, that might come in time. But until she can read the Satnav and take direction, I’m happy to take the lead, literally. It’ll be good for her to get a nice gentle run a couple of times a day before hopping in the trailer for a drink and a snooze. And to walk beside us when I have to push uphill! 2 ADPs for Scout the adventure pooch. I think she’ll be just fine, and when it’s just the two of us, we’ll have plenty of time to work on general good-dog behaviour and help her kick the drug habit. She’s already one hell of a cuddler, and bendy AF….I have to take Jeeves the bike apart to fly him out. I hope I can put him back together ok. I do not recommend practicing on foldy dogs…I definitely put this one together wrong… 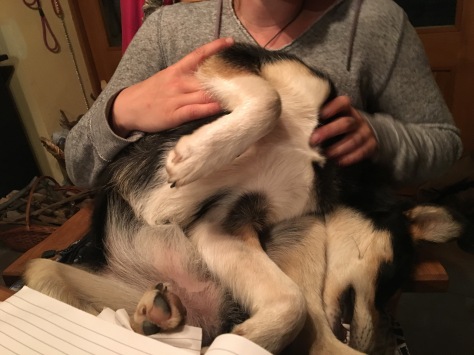 Catch up on the journey so far

A girl and a street dog cycling 2500 km home