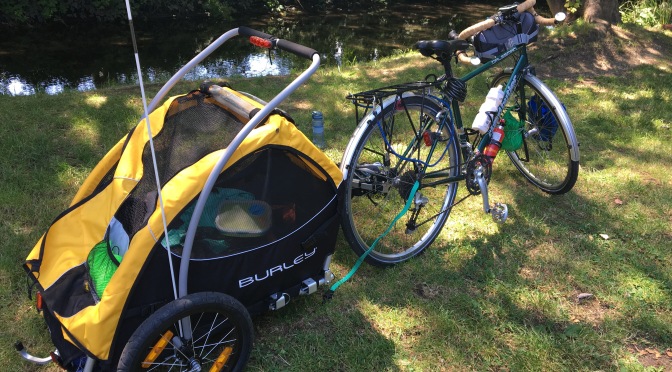 My mother turned 60 this year and she’s having a proper party, the first in her life, so she tells me. And to be honest, I don’t remember her ever having a party – my family never really went in for the birthday hype. But she’s done a lot of things differently over the last few years and now she’s actually having a full-on river punting, picnicking, hors d’ouevring, marqueeing, dining, live musicking, cocktailing birthday party with 40 of her nearest and dearest. Preparations are underway and it’s stressful but clearly going to be a huge success. Well, her creme caramel looked a bit funny and then I dropped something on top of it…sorry, Mum, it’ll still taste great. She wanted me up here a little early to help (she may be regretting that since the creme caramel incident) and I decided to use my journey to test out a few full days of cycling avec the trailer – loaded down with water and a big rug….here’s how that went…. 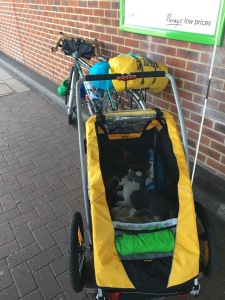 Ten minutes out of the door and I clipped the tire of the trailer taking a corner too quickly on an underpass causing it to tip and take the bike with it. I miraculously unclipped my right foot in time to save myself crashing to the ground underneath it all and learned a valuable lesson about trailer life, very grateful the only dog inside was a fluffy one.
I plotted a slightly more scenic route out of London from Greenwich to avoid the big roads – I’ve been knocked off before, I’m not interested in navigating the traffic with a trailer in tow which makes me wider and slower. I tried as much as possible to stick to routes that have been designated ‘local’ bike paths. Sometimes this meant a quiet residential road (ace), sometimes a small white line on the road separating you from zoomy traffic (meh), and sometimes a lovely tarmacked path frequented by dog walkers or people with push-chairs (aaaaah, lovely! Wait, what? Seriously?!). London cycle paths must be plagued by motorcyclists or something because every few hundred meters at the start and end of these paths (and sometimes in the middle) there are numerous ingenious barriers perfectly built to prevent those of us dragging a two wheeled trailer behind their bike. Sometimes I had to wiggle my way through a zig-zag thing, sometimes I had to unhitch entirely and lift the unwieldy thing over a horizontal thing, or a narrow bollard thing, or through a twisty thing…there were numerous, unhelpful things. Many people, however, were very helpful, (some were conscripted, some volunteered) but after about the fifteenth obstacle I began to be less smiley about it.

I do parkour; railings and bollards are things I can have fun with, but throw a few wheels and a 20kg trailer in the mix and it starts to get you down. Trying to manipulate the trailer around a sharp bend while holding Jeeves up is a tricky business. On one section of the route I had to battle (with a nice lady’s help) through a sharp zig-zag configuration of railings to enter a park, only to cycle 30 meters along the edge to another identical zig-zag to get out again. This time the lady had disappeared and I had to do it alone. Jeeves fell over twice and when I picked him up after the second time he bit me with his big chainring, leaving two chunky teeth marks in my shin. I sympathised with him, but it all got a bit tedious. I also left some very nice people rather confused…I think they expected to see a child. Not a rug and a soft toy…
To cut a long, frustrating journey short, I basically should have just taken the ring road and trimmed off 30km of not very cyclable cycle path through south London.

I got lost: I am not a good navigator. My brother is amazing at this, his internal compass could tell him which way was North after walking around an IKEA for an hour. I barely manage to work out where the car is parked. It’s a running joke in my family – the word ‘Bridgend’ is synonymous with Kate not really knowing where she is. That said, I’ve worked pretty hard at understanding maps and plotting routes etc. because I know I’m not naturally gifted in this area and sometimes there are not good signs and sometimes your satnav gets confused and sometimes it even dies because you’ve taken four hours longer than you were supposed to because of goddamn barriers and gravel.

Grit: Now, grit is different from gravel. Gravel can go do one. But grit keeps me going. I’m pretty gritty, and stubborn, and good at seeing the positives. Barrier number forty-something was one I could barely squeeze my bike through and there was no way I could get the trailer through it. It was 4.30pm and I’d seen one other person cycling the canal path in 30 mins. Luckily, just as I stood staring at the mind bogglingly cruel blockage a young man approached from the other direction. ‘Need some help?’ ‘Yes, please.’ I unhitched and he lifted from one side and I took it from the other. If we need to do this on the trip, at least Scout can hop out, with all the stuff inside it was about 10 kilos heavier than it needed to be which did not aid in lifting and twisting. ‘Wow! I’m so lucky you came along, thank you!’ I said to him. And that’s what my brain told me as I began the fiddly business of hitching up again. ‘Wow, I’m really lucky.’ Clever brain; telling me what I need to hear to keep me going. And then the stairs. The stairs that I had to grit my teeth and heave Jeeves up, slipping on gravel and dust, and then do the same with the trailer in the baking heat, which was so energy sapping I had to rest to return my heart rate to normal. ‘Hey, strength training too! That was an added bonus.’ That’ll do, brain, that’ll do.

And so, with dead satnav and only dear old google maps to guide me I wiggled my way to the campsite a full three hours later than I expected. It was blissfully quiet and calm and had an amazing shower block. Immediately I clocked a fellow bike tourer who asked expectantly ‘Dutch?’ ‘English!’ I replied almost apologetically (my primary language, if not my nationality). The Brits don’t have quite as strong a bike-touring culture as the Dutch so I imagine you’ll be right more times than you’ll be wrong if you assume a person on a bike with lots of bags is a Nederlander. Either that or my Danish ancestry has given me a Hollandic appearance…I’m 5’4….I’m not sure it’s that.

Edwin and I made that immediate connection that I think will be common on tour, jumping straight into conversations about routes and gear – he was on a 30 day tour and following a London – Land’s End route – and then, pretty quickly, more about our lives and careers. I envied his full, matching, Ortlieb panniers and handlebar bag set up, something that I have not yet managed to commit to purchasing and we discussed routes through Europe and the fact that I won’t have to worry about insurmountable barriers across cycle lanes anywhere else – solely an invention of the Brits. Phew.
He was up and gone before I clambered out of my tent – disciplined and on the road by 7am. Something I didn’t decide to push myself into just yet, although I think I might have to think about 5am starts to avoid the worst of the heat in Eastern Europe…cross that bridge when I come to it and all that. Maybe we’ll meet again in Holland…

It was another hot day and I deliberately avoided the canal paths Google wanted to send me on but for a good 20-30km I had to ride on 60mph single carriage ways which had either no possible path or one that was rutted and overgrown. A constant choice between puncture or close zoomy car scares. The Phoenix trail is lovely, I urge you to wander it by foot, horse or trailered bike – all are welcome here. For the most part it was simply a question of keeping on going. It was hot, my half hour lunch break turned into an hour after I got lost getting back onto the cycle path afterwards, and the A40 cycle path is barren and zoomy and boring but it was simple cycling…I just kept going. 80km was done and dusted and I was surprisingly physically fine. Barely any soreness the following day, and food and sleep recovered me well. Showers are also remarkable at making you feel human again. Top tip.

So, safely at my Mum’s I’ve been putting up tents and cooking and cleaning and turning her garden into a Moroccan Palace for her epic 60th birthday party. For someone who hasn’t ever had a party before, she’s certainly not pulling any punches. Go big or go home, I guess. As Edwin said to me at the campsite when I revealed my plans and my lack of experience, ‘Why start small?’. Why indeed. Two days was nothing. Bring on 5 weeks. Jeeves, Trailer and I are so, so ready.

Catch up on the journey so far

A girl and a street dog cycling 2500 km home 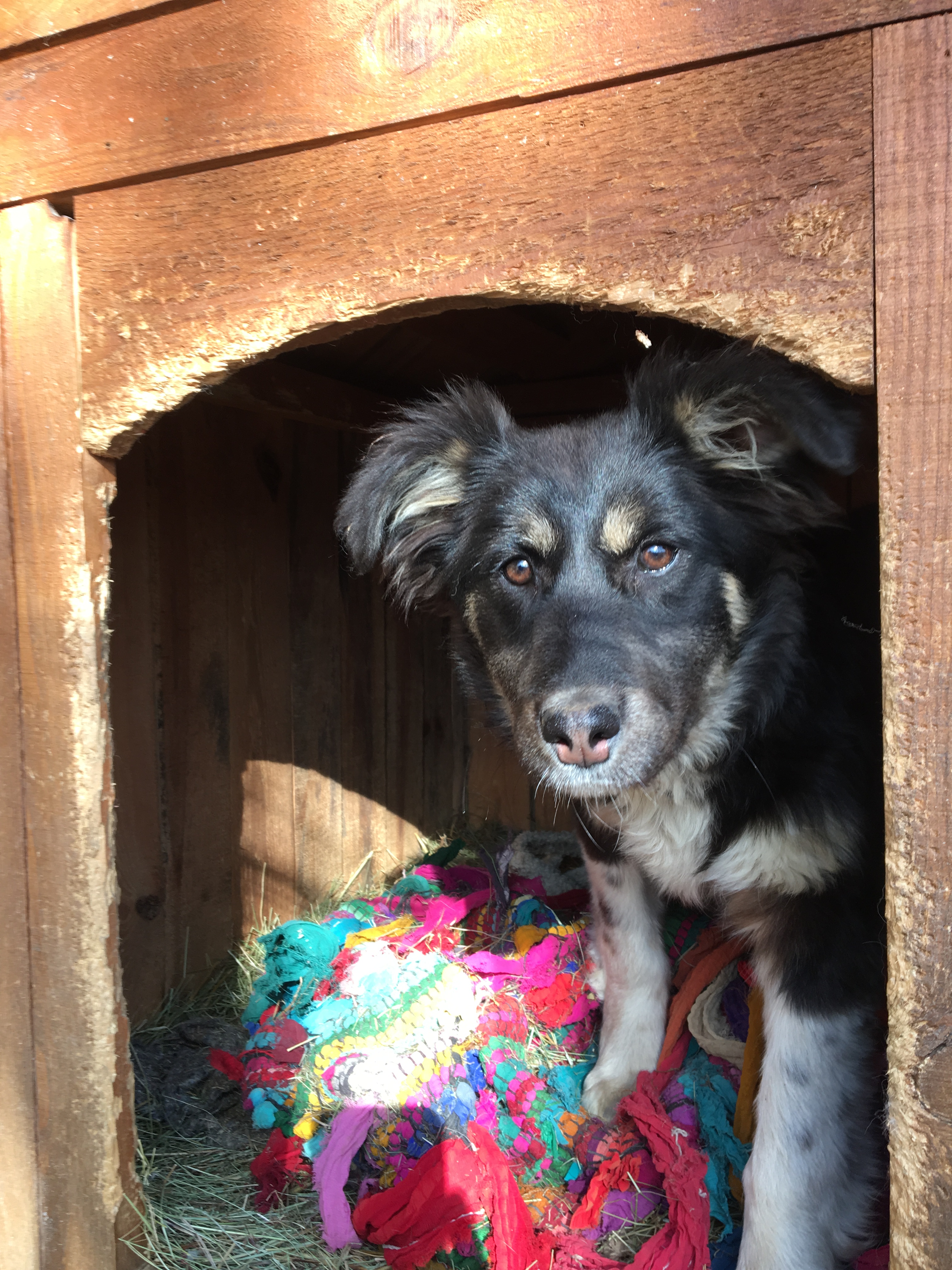